For the last day of our three day author interview feature, I have an amazing and fascinating person who wrote “Modified: Lunar Medical book one.”  I really had a lot of fun interviewing her, and I hope you have just as much fun reading what she said!

Hi Amy, and welcome to the blog.  I’ll start out with something basic.  What made you begin writing? 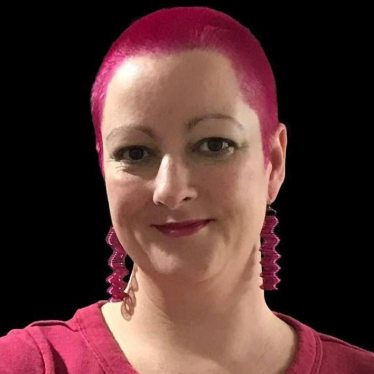 I started when I was a kid. On holiday one year Dad produced a foolscap lined notepad and wanted me to keep a diary. That notepad turned into many hardcover page a day diaries over the years, I filled every one. Eventually I wrote on an Atari computer, then a PC. There were a few years of blogging on a forum. I wrote my first novel longhand on holiday in an A4 book some 20 years ago. I have no idea what happened to it or how long it was.

What caused you to publish, and share your work with the world?

May 2016 was the 30th anniversary of a traumatic event. I was sexually assaulted by a female doctor when I was about 14. Of course nothing was done because no-one believed me. As a way of proving I was still here and still fighting, firstly I wrote erotica, secondly I had to be published for that anniversary. There was some interest from traditional publishing, but not an actual offer that didn’t involve me paying them. So I bit the bullet and self-published.

When and how did you finish your first book?

My first erotic novel was considered for publication but ultimately rejected. I’ve yet to knock that one into shape and publish it. The first book I published-Modified was written after a short story call out from a publisher who wanted menage/multiple partners. It’s not what I’d usually write, but I gave it a go. There were things they liked about the short story, but again they didn’t publish it. The characters from that story then went on to be the focus of Modified-the book that went before the short story. It was finished a few years before I published it.

If you could give a beginning author a piece of advice, what would it be?

Enjoy your writing. Write what you want to read. Then think about all the words you habitually use when you’re talking to someone, run a search for them in your book and remove most of them. I used to have a habit of using the word “actually.” I use it all the time when I’m talking, it doesn’t need to be there all the time in my writing.

That tip was interesting, and I’ll probably use it myself!  You mentioned you have weird animals. Care to elaborate on that?

There’s some pretty standard tropical fish, nothing unusual in them. My daughter has a rainbow fire tiger leatherback bearded dragon called Cossie. My son has a baby Russian Tortoise called Crunch. She still fits in the palm of my hand. The family in general has one remaining degu called Sam. He’s a small furry animal, the same family as a guinea pig and facially looks like a cross between a hamster, a squirrel and a chipmunk. Or maybe he just looks like a degu.

Do you have a funny story about something one of them did?

I’ve had to put covers on the filter pipes in the fish tanks. I have had to tip fish out of the pipe twice over the months. The pipe is blowing bubbles, blowing not sucking, what on earth makes the fish want to try to swim down it? They can’t get themselves out again. Being a dragon, I have naturally trained Cossie to fly, speak and breathe fire and she has just recently mastered the art of laying eggs under the skull ornament in her vivarium-all without the use of opposable thumbs. Quite gifted. There was a low flying helicopter over the house last night that rattled the windows, Sam the degu didn’t stop squeaking for ages. He rings the bell in his cage when he wants to come out or get someone to give him a treat. Then he’ll run around the cage for a bit, go back to the bell, ring it, you give him a treat and he wanders off and buries it for later! These days he makes a big fuss about getting into his exercise ball to have a run around, then he sits by my feet at the sofa and tries to chew through the ball depositing little specks of blue plastic all over the carpet. Yet he has a forest of wooden things in his cage to chew on.

What’s your absolute favorite kind of coffee, and how do you like it?

Large, weak, warm with loads of sweeteners! In Starbucks mine is usually a venti skinny sugar free vanilla latte kids temperature and my friend has a black coffee. She says what I drink isn’t coffee. I’ve recently bought one of those refillable cups for Starbucks, I’m not sure it’s venti-this makes me sad! I offer coffee to clients for my other business and they all seem to like the mild Dolce Gusto coffee I buy for the coffee machine in the office. I drink mine out of a pint mug with skimmed milk and 4 sweeteners. I only have 3 caffeinated drinks a day I switch to decaf after that.

If you could do anything as an author, what would it be? The sky’s the limit. Maybe even the outer planets or a nearby star system.

I would just like to be able to write full time and make some money at it. I’m not going to be remembered in 200 years for anything I’ve written and I’m not going to win awards, but I’ve been told I’m an enjoyable read. I’d like to build on that. Then I’d like to go to another planet where I’d be world famous and earn lots of money and write from there and make friends with all the aliens.

Name one thing you wish you had known when you were a new author.

I still consider myself to be new. I wish I’d just had more confidence to publish sooner. I would have been on my third book by now.

Would you have changed anything about your writing career so far?

I would love to be in the position to afford a professional cover for everything I write. The thought of having to find and manipulate cover graphics is holding me back. I dread it. I have books and stories ready to go except that I haven’t started on covers.

What is your latest book about?

Modified is a tongue in cheek erotic novel about a team of people on a moon trying to genetically modify various groups of people for disease resistance and turn them into super soldiers. Back on their planet the world is falling apart due to a virus outbreak and war and at that point they lose communications between the planet and the moon. The modifications of the soldiers have produced varying results from completely destructive mutants to viable candidates with elevated libidos. It’s a romp! Rather than being a book thoroughly researched for the science of it, I prefer to concentrate on the characters and how they interact with each other.

What is the main character like, and what is interesting about them?

Dayton is in charge on the moon, but he has no understanding of what is going on around him. Feeling trapped he tries to find a human connection with just about anyone he can. Job wise he is me when I had a job I felt an overwhelming responsibility for but I didn’t have a clue how to do the things expected of me. Day spends time questioning the morals of the modifications and the so called libidos of the soldiers, which apparently don’t rival his own.

What were the biggest challenges you encountered when writing it?

It was originally set on our moon and on Earth. I googled some science, I even understood some of it. Eventually I realised I had no interest in writing anything out of a physics text book and made up a world to set it on so I could mess with science and not have people point fingers and say “this doesn’t happen on our planet.” No, it wouldn’t, it’s not set on our planet or our moon. I made it up! It’s fiction. And it’s not really supposed to be taken too seriously.

What are you working on now?

There’s a follow up to Modified. A team goes back to Enceffia to search for survivors on the planet. It’s still an erotic novel, but it has some dark elements of people trying to come to terms with the destruction around them. It is still tongue in cheek. There is still plenty of  sex and there is definitely a fair amount of banter between the characters which one day is going to result in one person slapping another one senseless. There’s also a short story for a Spring themed free anthology. It’s funny, weird, contains no sex and I don’t believe anyone is going to die in it! It does feature a six legged bright pink alien sheep called Jefferson. After that I have a novella called Blue Lights set in a similar world to Modified, it’s gay erotica about a medic and an accident prone cop and some dubious means to obtain credit for simple things like food. It features some flying cars. Why do we not have flying cars yet?

What is your favorite place to write? Any extras like music or a favorite beverage, or is it more like “I have time. I don’t care where I am, I will use these precious ten minutes!”

I planned a book on my phone on the plane on the way back from holiday last year. But mostly I sit on the sofa with my oversized laptop on my knees, threatening to dislodge my knee caps, completely forgetting about the coffee on the bookcase on my right. Sam the degu provides various noises throughout the day including the strange slurping noise he makes when he’s attending to various hygiene tasks.

Thank you so much for answering my questions!  If readers want to find out more about you and your work, where can they go?

And now, a bonus question: what planet are you from?

Over the years I have claimed to be from Planet Zog, Mars or possibly now Enceffia seeing as I created it. (If I haven’t left any letters out-it’s an anagram of something I like. Most of the weird words I’ve used are. I hate naming things.)

Thank you so much, Amy, for appearing on my blog!  I wish you the best in your writing career.

5 thoughts on “Writing Her Own Pattern: Amy J. Hamilton”