One night, my partner and I were sitting around home, minding our own business, when we heard a kitten crying.

Cat lovers that we are, we immediately went to investigate.  Out there in the dark was a tiny kitten, yowling pitifully, calling to us for help but obstinately not letting us near. We tried for quite some time to capture her. All we could see was a little ball of fluff.  Loud fluff.  The yowling continued, and she mewed all night under my partner’s window.

In the morning I went out and found the ball of fluff under our overgrown jungle of tea roses. I got the loppers and worked my way in, eventually freeing the kitten. She was starved, she’d been bitten, she was long haired, and she was calico. Big greenish yellow eyes looked into mine. She was even having trouble walking. There was only one thing to be done…. I liberated the box the TV had come in, put bedding and a water dish in the bottom, and waited for the partner to get home so I could go get kitten chow.

We figured out that this flea infested little waif had apparently left her mother and litter-mates, crossed two yards with mean dogs in them and had come specifically to us. As if she knew we would be the ones to harbor her. She was right… we held her and carried her practically around the clock until she could maintain her own body temperature, rid her of the fleas, fed her well, cared for her leg till it healed, and defended her when our senior cat hissed until he finally accepted her as an adopted daughter. He helped raise her to a fine figure of a feline.

Cassiopeia Dawn, nicknamed Mouse, is now a rather rotund, sassy queen cat. Now that her adoptive “father” is gone she is boss cat of the house. She throws stuffed mice, wraps her curly tail around your wrist in response to pettings, and pats your knee when you haven’t paid her enough attention. She’s come so far from that starving kitten she was, eight years ago. She’s returned our love many times over. We wouldn’t trade her for anything. 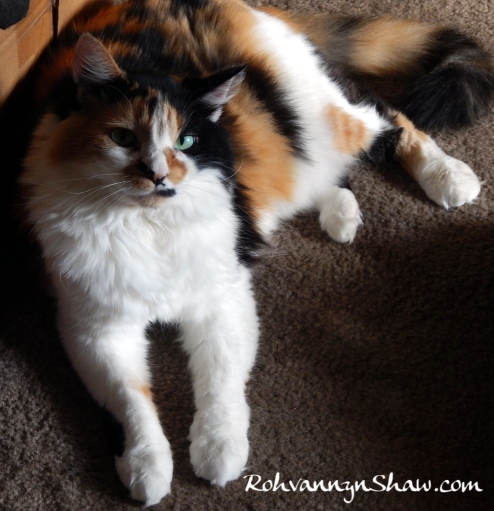 One thought on “The Bravest Kitten”