I enjoy a good haunted house. I’ve actually starred in several. In college, I scared the crap out of people by dressing up in my Kendo uniform and full armor, standing as still as a statue, and then letting loose with a loud kiai right AFTER they walked by! I startled quite a few people that way.

Another Halloween, I was a version of the girl from the Exorcist. A friend of mine dressed in a black robe with a cross and Bible, and I put on this ridiculous dress and blonde curly wig. Some judicious makeup and a crazed grin made me look the very picture of a possessed person. The disguise was so good, my own mother didn’t recognize a picture of me! That’s me, in the picture above. Fifteen years ago.

Later, at the flight museum, I’d dress in full aviator’s kit, complete with flight jacket, goggles, silk scarf,leather helmet, and zombie-whiteface. I’d lie still as a stone until people would come by, then I’d “reanimate” at just the right moment to startle them. I got very good at being absolutely still. I was merciful in that position. If I heard it was little scared kids coming, I’d keep my movements slow and give them a little warning. If it was teenagers or jaded adults, I’d wait till they had just passed by and then I’d let ‘er rip with the full freak factor!

My reward for doing that haunted house was a very special treat… getting to climb up into the cockpit of the TBM Avenger. It was a big reach to get to the footholds, and climb to the top of that grand old World War II bomber, but such a feeling of accomplishment! 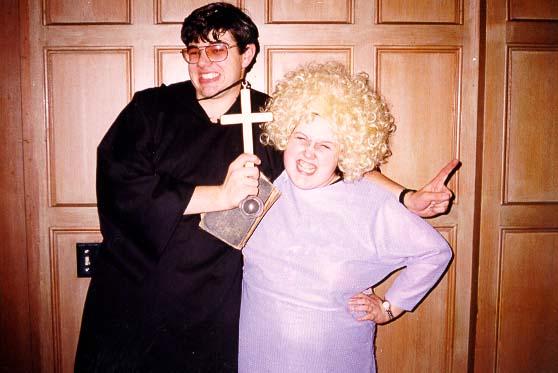