The red butterfly rested on the splintered balustrade, slowly moving its wings and gently glowing.

Kirae looked at it, wondering for perhaps the ten thousandth time how and why it could be here. It was such a cheerless house, and it was night – didn’t butterflies sleep at night? She couldn’t remember.

At last the butterfly lifted off, fluttering erratically down the stairs. The dim red glow followed it, carried by its wings. With nothing better to do, Kirae followed it. She glided down the uneven steps, fingers careful on the rough, ancient wood. The house was dark and she groped her way along, occasionally touching the rotted plaster at her right hand.

A chill breeze blew through the creaky house. Rice paper fluttered loosely in half broken frames. The smell of mildew and mold filled Kirae’s nostrils and she wanted to sneeze. She looked around, hoping for some distraction, something to keep her through the long night. Though there was a door to this house, she refused to go out at night – there were things out there, things that could shred her in a moment.

So Kirae stayed inside, and followed her butterfly. Right now it was traveling into one of the moldering rooms, flitting around in the cobwebby corners, still shedding a pale red light. This particular room had once been used for living. Faint traceries of ink could still be seen on the once richly painted walls. Kirae went close to one ancient painting, struggling to make out the trees and birds that had been there. She wished for a lamp, and drew her tattered kimono around her. It was cold.

She looked at the paintings a little longer, then her head snapped up when she heard a creak. It happened once, then again. She gasped, eyes wide, listening hard. Is someone in the house with me? She turned around, slowly, carefully, and saw the butterfly was gone. Now she felt bereft, alone, helpless. It was her only companion. She listened hard, strained her eyes for sign of a torch, a lamp. There were none. Then she heard the creak again, or thought she did.

In panic, Kirae dashed out of the room, ran on silent feet all the way down the wood-floored hallway, and around the corner, pushing cobwebs out of her way as she went. She ducked into the little room at the very end. In it was a large chest made of dark wood, and little else. She’d used to hide here when she was small. She lifted the lid, slipped inside, closed it as quietly as she possibly could. The box had once held clothes, now there was nothing but shreds and moth-leavings.

I hope it doesn’t get me, thought Kirae, as she drew her knees up to her chest in the close darkness. She waited, her legs aching after just a few minutes. She wished for more room, and she wanted to sneeze. There was silence for a long time, and she wondered if the sounds hadn’t really been footsteps, but perhaps just the old house settling? She lifted the lid just a tiny bit and listened hard. No, the footsteps hadn’t gone, she could still hear them, and they were getting louder. KIrae peeped from the box, just a bit, straining to see.

A strangely white, bobbing light flashed through the ancient house, making shadows dance crazily on the worn shoji screens and fusuma. It didn’t look like sunlight or lamplight, and KIrae couldn’t even breathe. Terrified, she closed the lid down and curled herself into as tight a ball as she could. Now she could hear the person walking, even from inside the thick walls of the chest.

Kirae shivered, hoping against all hope that no one would find her. But the inexorable footsteps continued, creaking awfully, and no doubt bringing that terrible light with it. She held herself still for as long as she could, a tremendous shriek rising in her throat and choking her. Her whole body was tight as a koto string, aching with the effort not to move. Then the creaking came into her room and stopped.

She heard a gasping sob.

Through the lid of the chest, she saw the bloodlight… the butterfly had betrayed her, led the monster to her…

KIrae could take it no longer. She was found! She leaped up from the chest, flinging the lid aside. She heard a scream that was strangely doubled – her own shriek was joined with another. She looked around wildly, reached out, saw a…

…a slender girl in a strange short white kimono, blue skirt, blue short kimono over the white, strange shiny black shoes, and she was holding a cylinder that blazed forth with light…

…here eyes were wide, her hair wild, and she was gasping with fear…

Kirae could only manage a sad moan.

This girl was alive.

Now she was trapped here, like Kirae, and eventually…

… she would be part of this place too, just like Kirae.

The butterfly was fluttering all around them. 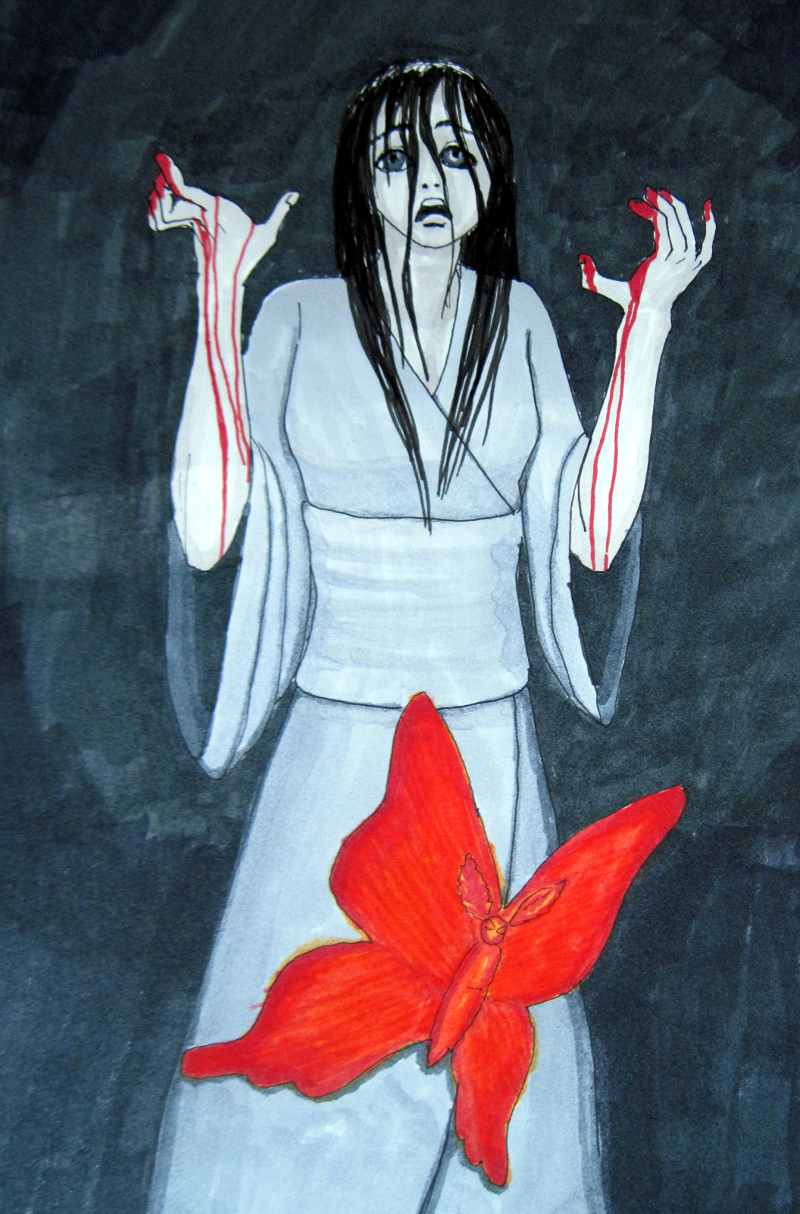 All content on this site (unless otherwise stated) is copyright Rohvannyn Shaw.

All rights reserved, no copying allowed without permission.