As we’re all waiting for Horse Isle 3 to be released in Live, I’m doing things that I have wanted to do but haven’t had time for, didn’t want to spend the money on, etc.  We beta testers have sometimes gotten in game currency for testing different features and I still had some left.  So, in order to decide what horses I want to specialize in when Live rolls around, I special ordered four purebreds so I could stand them side by side and look at the differences between them.

I ordered a Kinsky, a Budyonny, an Orlov Trotter, and a Don.  They are all very similar but have important differences.  In the end I decided I like the Dons best, for their Arab like appearance which includes large, expressive eyes, a somewhat domed forehead, a nice arch to the neck, and slim legs.  They don’t have a very high tail carriage and are a bit more blocky looking than an Arab but that’s okay.  A really big deciding factor is that, like Akhal Tekes and Kinskies, they can have a beautiful metallic coat.  So I decided I want to try to create a sub breed of Kinskies with a metallic coat and a fair amount of speed.  Here are my four, all standing together. 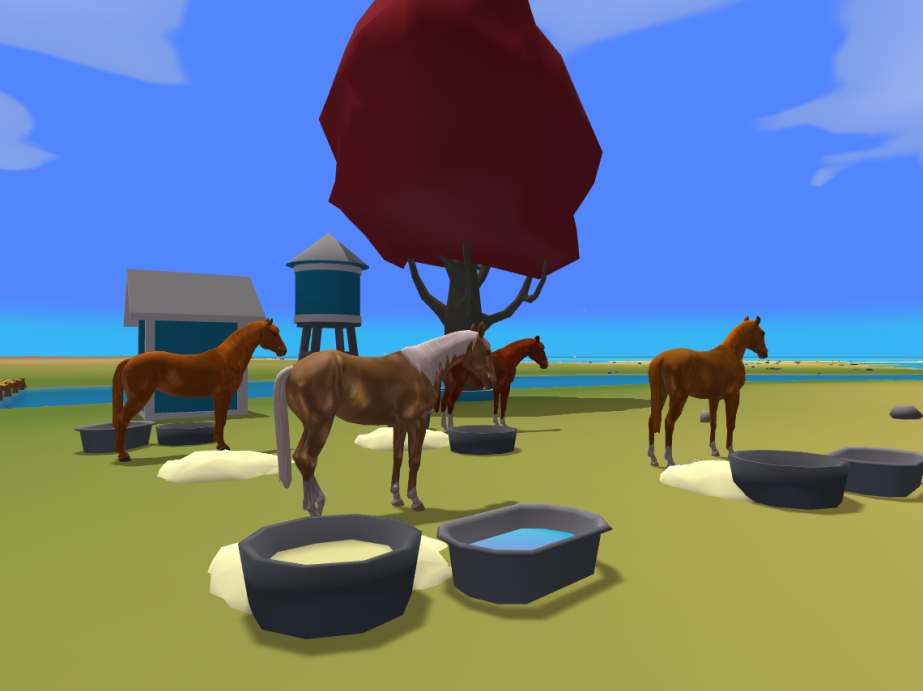 Another thing I wanted to do was climb the ruin at the center of the world.  It has a big chamber inside and is really tall, several times the height of the tallest tree.  I discovered that you can indeed climb up it but there’s a trick.  First, here’s what the thing looks like: The trick to climbing up this giant statue is to start at the front of the neck, and jump up, working your way back and forth and always staying on a sloping area.  Then as you get to the spot where it curves out again, you head to the right, where there are still sloping areas you can climb up, until you reach the mane where you can get up the rest of the way.  There’s a nice safe spot to stand between the ears, where you can look around:

Once you get tired of looking around at the beautiful view, you could climb back down – or slide – or do what I did, as a being totally sure of my own invincibility.  I jumped off the nose and took a screen shot while I did it.

Then I bounced.  Twice!

And I walked a little ways away and looked back at what I had just jumped off of.

Man, I love this game.

(All credit and props go to Durbin Development.)